skip to main | skip to sidebar

Since there is a lot of misleading information about US debt being thrown about, and very few fact-based articles I thought that it might be useful to collect the data. Both about levels and ownership of US debt, and about US holdings of foreign securities.

Of this, China and Japan each hold about $1.1 trillion: the full list of foreign holders (as of July 2012) of US debt can be seen here. Some interesting take-aways

As an interesting aside, household debt is almost exactly the same (in 2011) as the amount of US debt that the public owns (the figure below is from the NY Fed's Quarterly Report on Household Debt.) 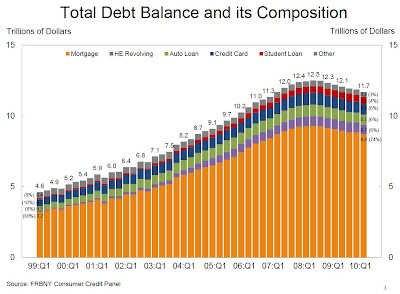 How much does the US own of other countries' debt? The latest release by the treasury department shows that, as of December 2011, the US owns about $6.8 trillion of foreign debt ($2.3 trillion) & equity ($4.5 trillion). If you're interested, here's the complete report for 2010.

So does the US government actually own more foreign securities ($6.8 trillion) than other governments own its debt ($5.7 trillion) ? In Krugman's article, he claimed that

"... every dollar’s worth of foreign claims on America is matched by 89 cents’ worth of U.S. claims on foreigners. And because foreigners tend to put their U.S. investments into safe, low-yield assets, America actually earns more from its assets abroad than it pays to foreign investors."

I cannot find support for the 89% number: here's the summary of the numbers (in Trillions of dollars)

However, the statement that the US earns more from its assets abroad than it pays to foreign investors can be validated: if you combine the data provided by the St. Louis Fed's FRED (aka the most amazing economics website in the world) on Income Receipts on US Assets Abroad (BOPXR) and on Income Payments on Foreign Assets in the US (BOPMI), the resulting chart shows that receipt have consistently exceeded payments, and increasingly so in the last few years. 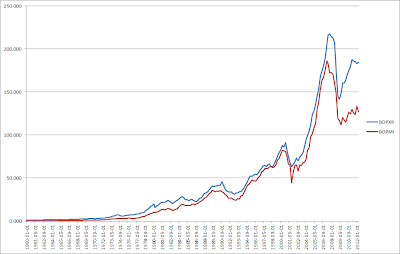 And maybe that's the most relevant set of data.

Posted by Rajeev Krishnamoorthy at 5:46 PM